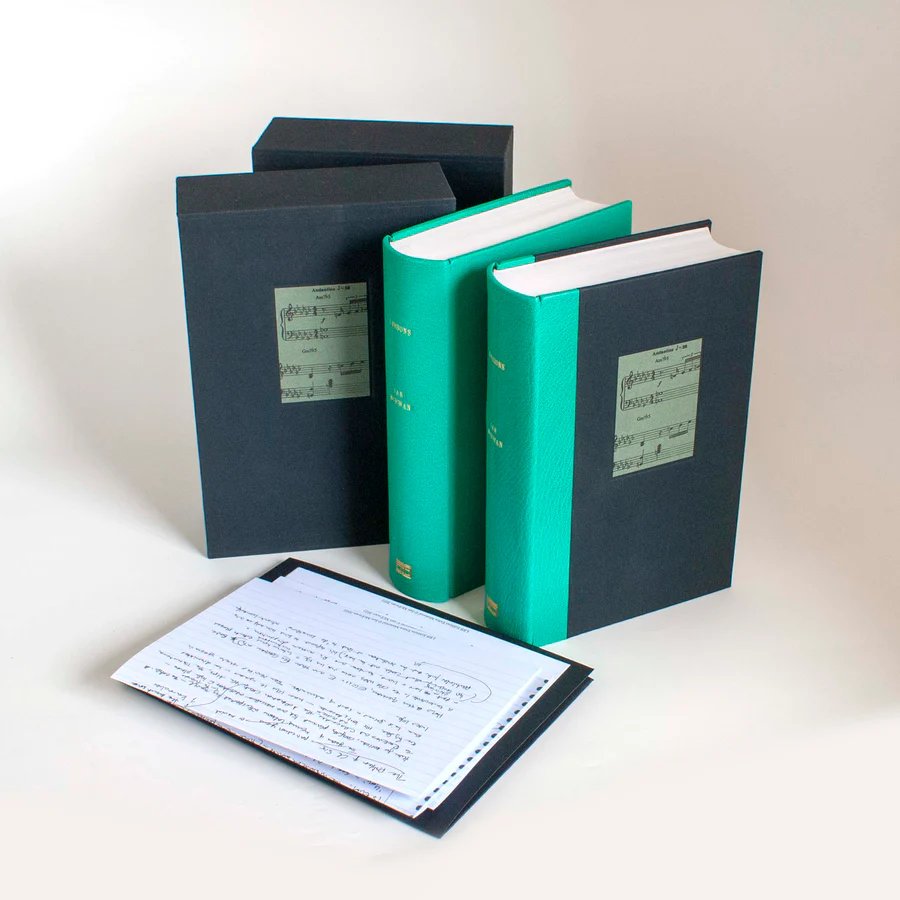 Order your limited edition of Lessons from the London Review Bookshop.

This is a special limited edition, exclusive to the London Review Bookshop, signed by the author, hand numbered and published in association with Jonathan Cape.

There are 100 copies only (plus five for private circulation) printed on 120 gsm Logan Book Wove paper in typeface Palatino. Seventy-five copies, numbered 1 to 75, have been quarter bound in Harmatan finest grain leather (Green 17) with Dubletta cotton sides and label design printed by letterpress to front of book, and contain, in a pocket, two facsimile pages from the author's working notebook for the novel. Twenty-five copies, numbered i to xxv, have been fully bound in the same leather and contain an extra page of the author's early holographic notes.

All copies have head and tail bands, gold blocking to the spine and are housed in a slipcase lined in suedel.

The bindings have been designed by Andrew Stilwell and Patrick Roe and produced by AMR Logan Press, Finedon, Northants.

Publication date is 13 September 2022, copies will be sent after this date.

Order your limited edition of Lessons from the London Review Bookshop. 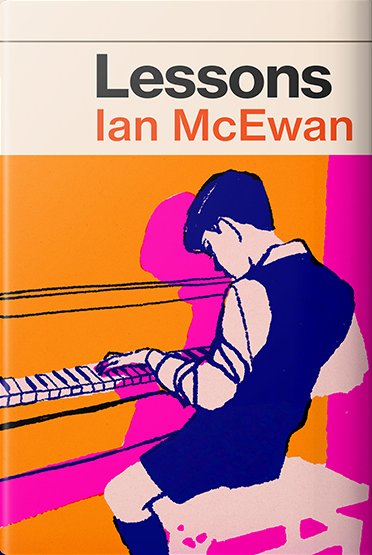 Ian McEwan, our foremost storyteller, returns with an ambitious, mesmerising new novel, Lessons. Publishing in September 2022, Lessons is a chronicle of our times - a powerful meditation on history and humanity told through the prism of one man’s lifetime.

Preorder your copy of Lessons today.

When the world is still counting the cost of the Second World War and the Iron Curtain has closed, eleven-year-old Roland Baines's life is turned upside down. 2,000 miles from his mother's protective love, stranded at an unusual boarding school, his vulnerability attracts piano teacher Miss Miriam Cornell, leaving scars as well as a memory of love that will never fade.

Now, when his wife vanishes, leaving him alone with his tiny son, Roland is forced to confront the reality of his restless existence. As the radiation from Chernobyl spreads across Europe, he begins a search for answers that looks deep into his family history and will last for the rest of his life.

From the Suez Crisis to the Cuban Missile Crisis, the fall of the Berlin Wall to the current pandemic and climate change, Roland sometimes rides with the tide of history, but more often struggles against it. Haunted by lost opportunities, he seeks solace through every possible means - music, literature, friends, sex, politics and, finally, love cut tragically short, then love ultimately redeemed. His journey raises important questions for us all. Can we take full charge of the course of our lives without damage to others? How do global events beyond our control shape our lives and our memories? And what can we really learn from the traumas of the past?

Ian McEwan will support the publication of his new novel Lessons by participating in a wide range of events. The list below will be updated as more information is known. Please confirm all details through the sponsoring event websites (linked when possible).

11 September - Toppings in Bath at Komedia

'This novel had everything': An Oral History of Ian McEwan's Atonement

Critical acclaim, record sales and a film starring Keira Knightley made Atonement a publishing phenomenon. From its origins as a sci-fi story to the elaborate creation of its iconic cover, the behind-the-scenes story is no less gripping. Here, in the year of its 20th anniversary and publisher Jonathan Cape's centenary, we tell the full story of the book that changed British fiction.

"Emerging from the ruins of a disregarded sci-fi short story, Atonement was filed rapidly and in parts, the novel’s crucial final section arriving only after production had already begun. Along the way, McEwan changed the title at the last minute, and the publishing house embarked on one of the largest photoshoots it had undertaken to take a risk on what became its most enduring cover. What resulted was a collision of publishing good fortune – and one of the greatest books of the 21st century. In the centenary year of publisher Jonathan Cape, and 20 years since it appeared in bookshelves, here’s how Atonement happened, according to the people who were there." — From the introduction by Alice Vincent

Read the full oral history on the Penguin website.

Ian McEwan’s works have earned him worldwide critical acclaim. He won the Somerset Maugham Award in 1976 for his first collection of short stories First Love, Last Rites; the Whitbread Novel Award (1987) and the Prix Fémina Etranger (1993) for The Child in Time; and Germany's Shakespeare Prize in 1999. He has been shortlisted for the Man Booker Prize for Fiction numerous times, winning the award for Amsterdam in 1998. His novel Atonement received the WH Smith Literary Award (2002), National Book Critics' Circle Fiction Award (2003), Los Angeles Times Prize for Fiction (2003), and the Santiago Prize for the European Novel (2004). Atonement was also made into an Oscar-winning film.

In 2006, Ian McEwan won the James Tait Black Memorial Prize for his novel Saturday and his novel On Chesil Beach was named Galaxy Book of the Year at the 2008 British Book Awards where McEwan was also named Reader's Digest Author of the Year. Solar won The Bollinger Everyman Wodehouse Prize for Comic Fiction in 2010 and Sweet Tooth won the Paddy Power Political Fiction Book of the Year award in 2012. Ian McEwan was awarded a CBE in 2000. In 2014 he was awarded the Bodleian Medal.

McEwan is published by Jonathan Cape in the UK and Nan A. Talese/Doubleday in the US.

A selection of interviews and videos in which Ian McEwan discusses his writing, science, and other issues.

Essays, lectures, interviews, videos, and other resources related to McEwan's interest and involvement with the sciences.

Ian McEwan's works have been translated into over 30 languages. Learn more about his foreign publishers.

"It wasn't only wickedness and scheming that made people unhappy, it was confusion and misunderstanding; above all, it was the failure to grasp the simple truth that other people are as real as you. And only in a story could you enter these different minds and show how they had an equal value. That was the only moral a story need have." – Atonement 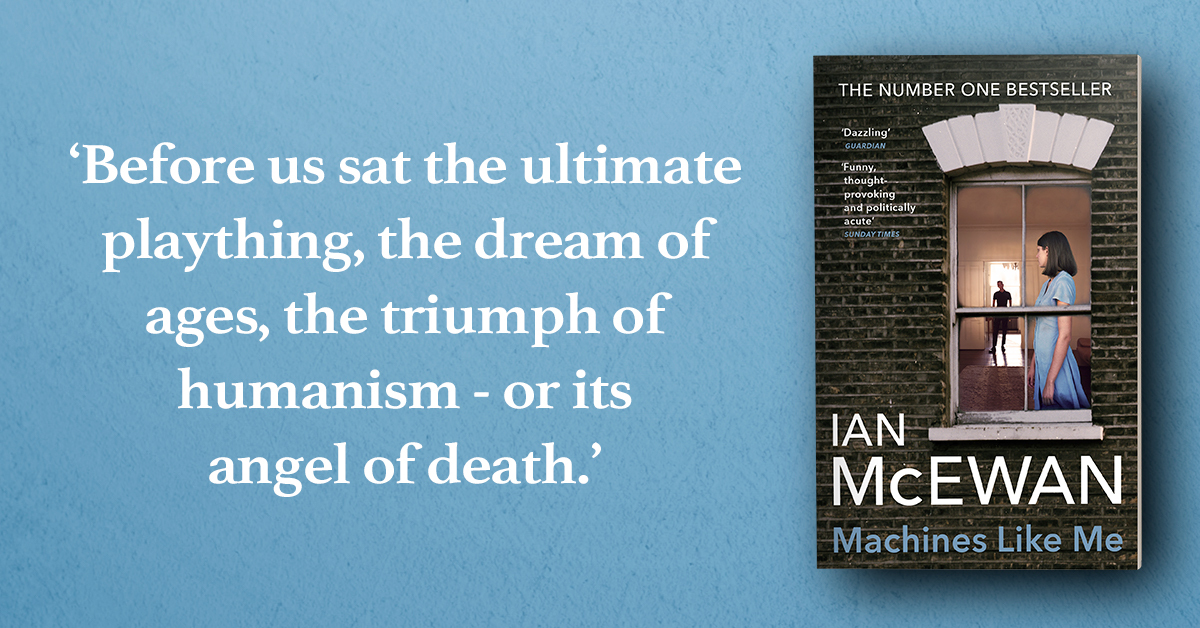